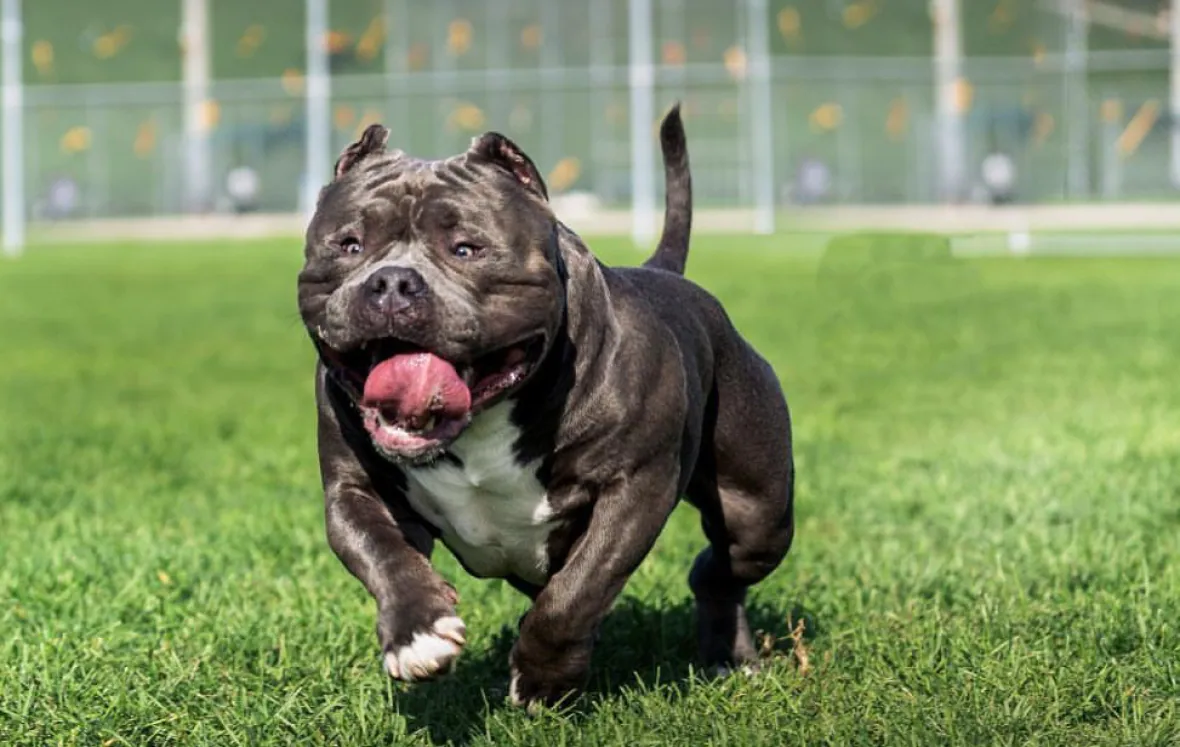 A dog that made headlines after being picked up by animal services in early October and released after his plight prompted rallies against pit-bull regulations in Ontario — has allegedly mauled a 13-year-old, leaving the boy's face swollen and needing stitches

Blu, also known as Dwaeji, was held by Vaughan Animal Services (VAS) for 24 days before he was freed and allowed to reunite with his owners, Tommy and Melissa Chang.

The boy said after wrapping up class on Friday, he saw Blu and told his instructor that he was scared of dogs. Then, he said his instructor challenged him to conquer his fear and approach Blu.

"He told me you have to overcome your fears and if you don't, you won't be a taekwondo national champion," Muhammad told CBC Toronto.

The teen had to go to Sick Kids hospital. He needed more than a dozen stitches to close the wound in his swollen face.

The one-year-old American Pocket Bully was seized by VAS over a month ago on suspicion he was a pit bull, but after further investigation, he was determined not to be and he was released back to his owners on Nov. 1.

The attack reportedly happened four days after he was released.

"I've been feeling really bad because after these stitches, there might be scars on my face. It hurts a lot," Muhammad told CBC News.

The Ontario government prohibited pit-bull ownership in 2005. The legislation also says any dog that shares similar characteristics is also banned — a clause many dog owners find problematic. But on Friday, Ontario eased regulations related to the province's pit bull ban, now allowing seized dogs that appear to look like a prohibited breed to be released.

CBC Toronto reached out to Tommy Chang, who declined to be interviewed. Leo Kinahan, a lawyer retained by the family, sent a statement Monday morning.

"Neither I nor my client are in a position to comment on an ongoing investigation other than to state that ultimately the actual facts will come out," the statement reads.

As of Monday, Vaughan Animal Services said it has not seized the dog, and the incident is being investigated by police, the City of Vaughan said in an emailed statement to CBC Toronto.Source:

Toronto police said it received a report of a dog bite on Friday, but didn't comment on next steps.

"It would be an extremely traumatic experience for a dog to go from a loving home to then caged up at an animal shelter where the dog has very little interaction with people," said Jennifer Friedman, a lawyer who specializes in cases involving animals.

"I wouldn't be surprised if the dog would respond differently," or take a while to return to its old routine, Friedman said

She said a warning or dangerous dog order could be issued as a result of the attack.

A spokesperson for the Ministry of Agriculture, Food And Rural Affairs said because the dog was released on Nov. 1, prior to the regulatory amendment made by the provincial government on Friday, strict criteria when releasing a dog back to its owner do not apply.

"Had the dog been released under the government's changes, the owner would have been required to follow stringent criteria set out in the regulation," the spokesperson said.

Under the list of regulations, the owners would have had to make sure the dog does not have contact with the general public or anybody unfamiliar with him and is not allowed to escape. They would have also been required to ensure the dog is kept inside with exceptions for exercise and veterinary visits.

While those conditions do not apply, owners are still liable for damages resulting from a bite or attack by the dog on another person under the Dog Owners' Liability Act (DOLA). which "continues to apply to any dog that poses a danger to the public, regardless of breed," the spokesperson added.

But Muath Alzghool, who was at the facility when he heard his son scream, said more needs to be done to address the attack.

Alzghool said the owner's son, an instructor at the facility, told him not to call 911, after the dog bit his son.

"He is calling on the Ford government to reconsider the pitbull legislation.

"The most important thing for me to put some rules or to have some rules restrict these dogs from entering these facilities," Alzghool said.